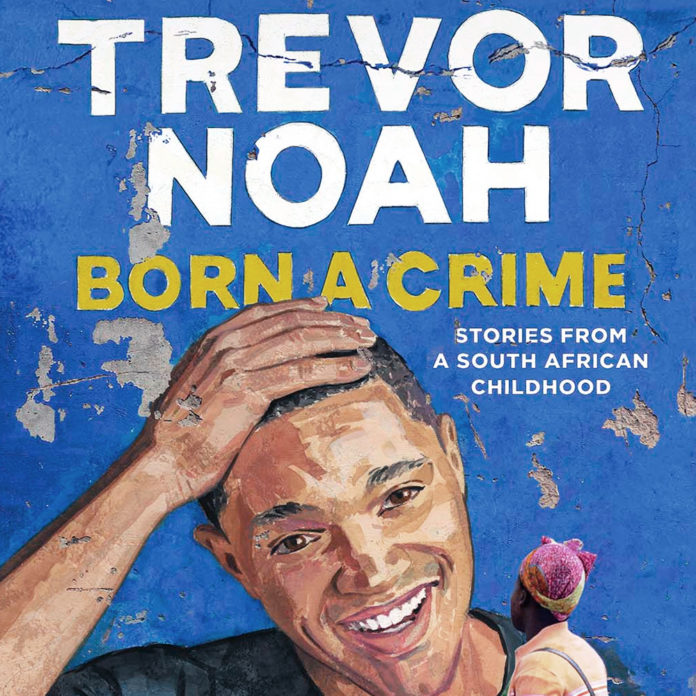 Before I get too ahead of myself, a bit of background might be necessary. Trevor’s rise in popularity in his motherland was because he was relatable. His acts were humourous social commentary. Genius. It is obvious that his journey to his present role was crucial. Having said that about Trevor, let’s move on to his book.

What Born A Crime isn’t

This might be a bit of spoiler for some: I knew the book was about his life. So, I assumed it would also be about how he got to where he is now. Unfortunately, maybe, fortunately, as you’ll see shortly, he did not. He doesn’t spell out how he got into comedy and ended up the host of The Daily Show.

I suspect that this might be for another or the next book or a biography later.

What Born A Crime is

I wasn’t sure what to expect since Born A Crime was Trevor’s first published book, but he did not disappoint. In a nutshell: Born A Crime is a well told, captivating and inspiring body of work. From years of writing and performing, Trevor Noah has honed his storytelling skills. He has extended his ability to captivate an audience beyond the spoken to the written word.

His life’s story is laden with many smaller ones and steeped in invaluable life lessons. Besides being a comedian and storyteller, it is obvious Trevor Noah is a thinker. The way he combines these three elements is akin to a jeweller polishing a diamond. Wisdom emerges and is put on a pedestal for appreciation. A lot of this emerges from his interactions with his mother.

The book is a tribute of note to Patricia Nombuyiselo Noah, his mother. There is no way he could’ve written a story about his life without his mother. Who he is, is because of her. From faith to academics, their dialogues draw the curtain back on how Trevor became who he is. As he shows off the heroine in his life, he reveals who he is.

His candour amplifies his authenticity. The brief debate he had with himself at the hospital after his mother was shot is a great example. “What if I pay a lot of money and my mom doesn’t make it through the surgery? Would I have wasted the money?”

From the vantage of hindsight Trevor draws parallels between the past and present. He shares how he experienced historical South Africa. Being mixed race (coloured in South African terms) he had to deal with the challenge of fitting in. It was illegal for people to be intimate with others from a different race hence, the clever title of the book.

Who would’ve thought that Trevor had a ‘brush’ with the law? Or that he went to his seniors’ school dance with the most beautiful girl and still missed out on the dance? What about that he was never that cool. I wouldn’t want to spoil it for you so I won’t tell you everything.

I’m sure you’ve figured it out by now, so get the book; it’s worth a read. Think about getting an extra copy for a friend.