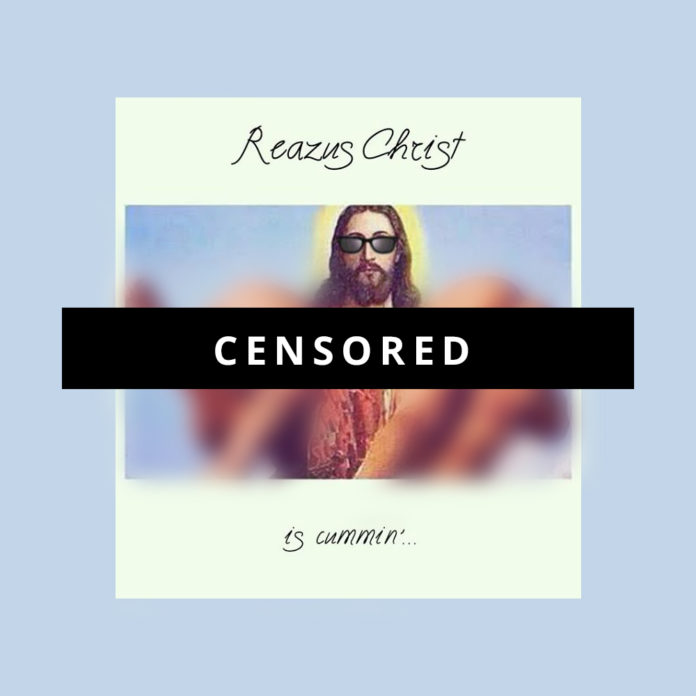 Social media is buzzing and people are fuming over Reason’s controversial album cover. In his statement Reason says, “In an age where many powerful structures and bodies of control choose and dictated to the world what the truth was, the “new generations” constant urge to question their perspectives has always been a result of them discovering new ones. Moving into the future, one often finds themselves in conflict with their present self, based on previous notions we had of ourselves that were based in the future. Which is now the present. Growing up as a kid, I was given the tools and weapons to protect myself from the evils of this world. I’ve since gone through a roller coaster of experiences that have tainted that innocent and angelic image they were trying to protect, and it has left me with new truths. At 1pm on Friday the 24th of July, I will present to you a few new truths. Not YOUR truth. Not THE truth. But A truth. MY truth. And this image of my truth”. #ReezusChristIsCummin.

Look, truth be told, most of the images we have of Jesus today are probably not accurate. Jesus was a Jew, so He likely had dark skin, dark eyes, and dark hair. One thing is clear: if it were important for us to know what He really did look like, Matthew, Peter and John, who spent three years with Him, would certainly be able to give us an accurate description, as would His own brothers, James and Jude. Yet, these New Testament writers offer no details about His physical attributes.

We must remember that the Bible warns us about using God’s name in vain. Because of the greatness of the name of God, any use of God’s name that brings dishonor to Him or to His character is taking His name in vain. The third commandment in the Bible forbids taking or using the Lord’s name in an irreverent manner because that would indicate a lack of respect for God Himself.

If we profess to be Christians, but act, think, and speak in an ungodly or profane manner, then we’re using His name in vain. When we misrepresent Christ, either intentionally or through ignorance of the Christian faith as proclaimed in Scripture, we take the Lord’s name in vain. When we say we love Him, but do not do what He commands, we take His name in vain and are in danger of hearing Him say to us, “I never knew you. Away from me” on the day of judgment.

So we ask, is this creativity, blasphemy of Jesus or degrading of women in that album cover? What’s your take? Just click the banner below.