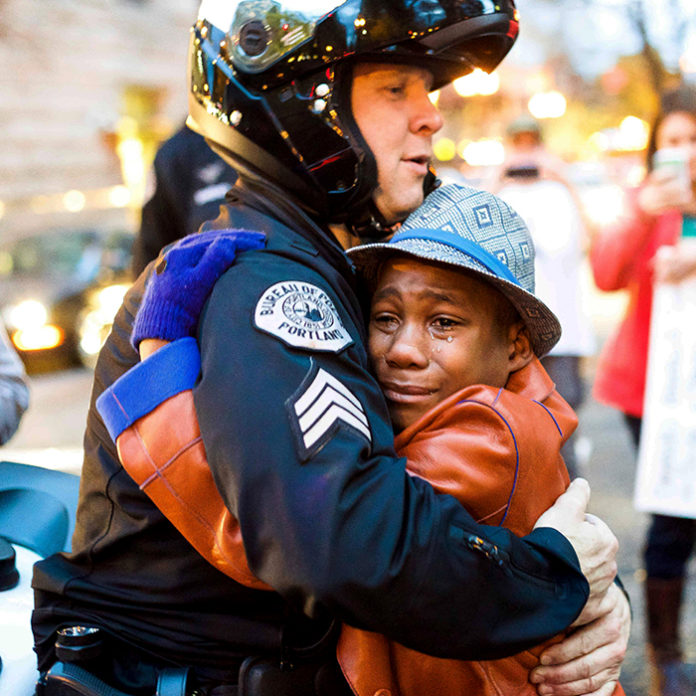 It is true that a picture is worth a thousand words! I was wrapping up my day yesterday when I came across a picture which not only caught my attention, but also moved me. This picture expressed much more than words could ever say. Before I could go any further reading the article in which this picture was embedded, tears rushed to my eyes. What a way to end the day!

Since August, Ferguson, Missouri has been in turmoil following the fatal shooting of 18 year old black American Michael Brown but for the past week, this neighborhood and a few other cities were rocked by more violent rioting and looting after a jury decided that the police officer who shot Brown should not be charged over the killing.

The situation in Ferguson is a matter of concern not just for the people of Ferguson and America, but for many people around the world. Issues of racial division, injustice and discrimination are hot topics in today’s society and brings to question the way in which we live, in relation to how we treat one another on a day to day basis. What is happening in Ferguson and the various opinions shared on the internet so far show how divided we are. In the midst of all this, what we need and are so desperate for is hope.

The picture I’m talking about came as a breath of fresh air, as that glimmer of hope we all are looking for in such a difficult time for the people of Ferguson in particular and the world at large. Captured by photographer Johnny Huu Nguyen, the picture shows a young African-American boy hugging a white police officer, with tears flowing down the young boy’s cheeks. According to TVA News, this hug was exchanged as protests were in progress last week in Portland – when in the crowds, Sergeant Bret Barnum noticed a young boy, 12 years old Devonte Hart in tears carrying a poster on which it was written “Free Hugs”. He approached him and chatted for few minutes. Sergeant Bret then asked Devonte if he too qualified for a free hug, and what happened in the seconds that followed is what you see in this Picture.

Now, does the fact that we see this young boy hug a police officer make everything alright? Does this take away the pain of Michael Brown’s family which feels no justice was served for their loved one? Does this picture ease the suffering of everyone affected by the situation in Ferguson? Absolutely not! It is terrible to see so much violence, so much pain as we are seeing in Ferguson and it’s not just in Ferguson where conflict is taking place, it’s everywhere. Some just don’t make news headlines.

So seeing a picture like this is indeed a breath of fresh air! There are so many valid reasons why we fight and protest but as we do so, let’s allow this picture to remind us that LOVE is something every human being craves for especially when times are hard, and the special thing about love is that it transcends skin color and any other differences we have to touch the soul and strengthen us on the inside. It gives us hope, which we can’t do without. Protests in Ferguson are continuing but this picture is very symbolic and carries a message too strong to ignore.

This doesn’t make issues at hand disappear, but help us face them better, being strengthened by the power of love. There couldn’t have been a better time to give free hugs than amidst a situation where all hope seems to be lost. This young boy inspired me, I hope he inspires you too.

Here at 1Africa, we love to share news of a far greater love than the beautiful moment we see in this picture. Continue on with the video that comes after this post and find out more.