1Africa
Home Culture Is the fall of the Rhodes statue significant? 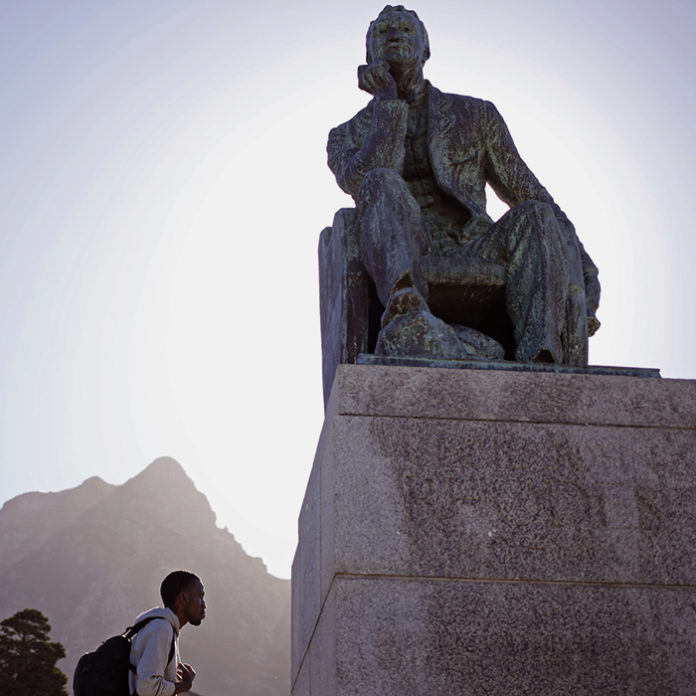 This is the first image that  comes to my recollection whenever the name Cecil John Rhodes is mentioned. While the imposing figure of a somewhat sinister looking Rhodes may have died a decorated man to whom the British empire sung praises for his great African exploits,  he was not always the grand figure the modern world knows of today.  As a sickly and asthmatic boy, Rhodes had to receive the remainder of his education under the watchful eye of his father as attending the local grammar school proved to unbearable for the ailing youngster. A turn of fortune occurred when his father determined to send him abroad to try the effect of a sea voyage and a better climate. And a better climate he found, along with it, great fortune and influence. Some may have called him a power hungry individual with illusions of grandeur in pursuit of the respite he was deprived as a child, while many I am sure stand in salute or a hero who sped up the civilization of the forgotten world, the dark continent of Africa.

In light of recent developments at the University of Cape Town (UCT) in South Africa, one then wonders if historical monuments such as the statue of Cecil John Rhodes that was subject of debate, should be a matter of concern. Rhodes bequeathed the land on which the university was built, but he also slaughtered Africans by the thousands in colonial conquest and helped lay the foundations of apartheid in South Africa. Some protesters believe it makes people feel uncomfortable and that it’s the biggest symbol of the institutionalization of racism. In all fairness, Rhodes was no saint and his hatred for non-whites was apparent.

In his last will and testament, Rhodes said of the British, “I contend that we are the finest race in the world and that the more of the world we inhabit the better it is for the human race. Just fancy those parts that are at present inhabited by the most despicable specimens of human beings what an alteration there would be if they were brought under Anglo-Saxon influence, look again at the extra employment a new country added to our dominions gives.”

That said, one must ask the question again, why must the statue of a man who is dead and gone, buried in the far away Matobo Hills of Zimbabwe, be a matter of concern here and now? Many Africans may be able to relate to similar scenarios, why should buildings and roads still hold names of individuals who stood by and watched while Africans were being slaughtered like sheep?  Why should we have heroes in the eyes of a few be imposed on the majority who still suffer the consequences of their very actions?

Many questions linger on my mind. As the statue of Cecil John Rhodes is being taken down from it’s place of prestige at the University of Cape Town, the strongholds that hinder Africans from success still remain intact, threatening the future of our continent. The student who has been waiting for years to gain university entrance is still at home as I write. The one who was turned away for failing to pay fees still remains that, a drop out for financial reasons. The statue may be gone and generations to come may never know who Rhodes is but they will still ask, “why are we poor?”, “why can’t we get an education or employment?”

The institution of imperialism was not set up by simply setting up a building or statue, it took ingraining ideologies and beliefs into the minds of both oppressor and the oppressed. Telling the privileged that they have every right to milk and honey while the downtrodden were made to believe it was their God-given destiny to be subservient. So I ask again, is taking down the statue a victory or pacifier that detracts from the real issues that hold us back as individuals, countries and as a continent?