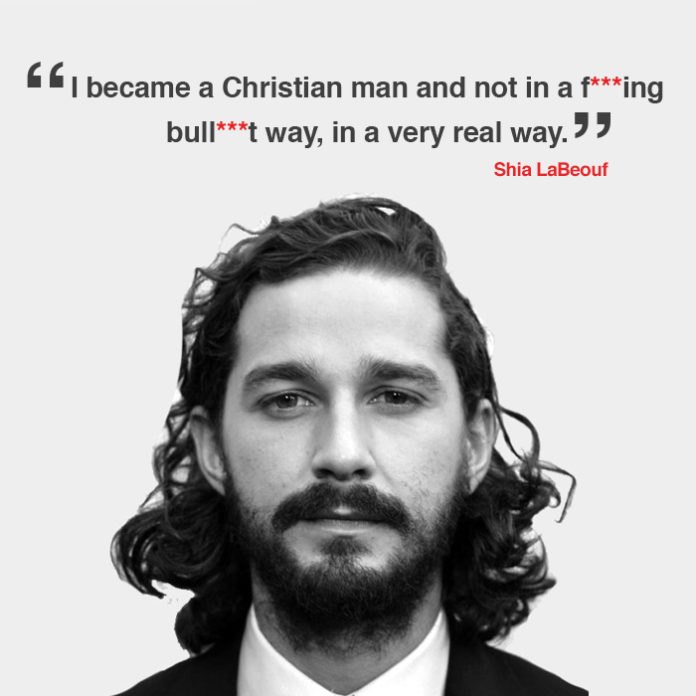 Ah yes! The soothing sounds of Christians squabbling and fighting among themselves. It never gets old… Not.

If you’re au fait with pop culture and mainstream entertainment, you will know that the big story of the moment is the debate raging in Christian (and non-Christian) media circles about whether Shia LaBeouf is really a Christian now or not. For those of you not familiar with the name, Shia LaBeouf is best known for playing Sam Witwicky in the 2008 film Transformers, a role he reprised in two sequels of the franchise. His latest film, Fury, sees him team up with megastar Brad Pitt and Logan Lerman. Sure, he’s had his run-ins with the law but nobody can take away from him the thirty plus films he has under his belt. That’s quite a body of work – and it doesn’t hurt to have Steven Spielberg in your corner!

Now, onto this juicy business about him becoming a Christian. This month, in an interview with Interview Magazine, Shia had this to say about his experience on his latest project: “I found God doing Fury. I became a Christian man, and not in a f*****g b******t way – in a very real way. I could have just said the prayers that were on the page. But it was a real thing that really saved me”. A number of varying opinions and commentaries have popped up since the interview, with some celebrating this as great news and an addition to the Christian community (read God’s Kingdom) while others have discounted his comments as nothing more than the empty grandstanding of an insincere entertainer.

Whether Shia has really become a Christian or not is irrelevant. What a moment like this does, though, is shine the spotlight yet again on how sadly divided Christians are. Regardless of  the actor’s sincerity or lack of it, Christ died and rose for Shia as much as He did for anyone else. His arms are as much open to receive Shia or anyone else who turns to Him in faith as they are to anybody else. The true state of our hearts is only known to God and we should never forget that Christ made it a part of His business to spend time with the very people everyone else was quick to dismiss and spit on.

Am I saying we should believe everything we hear? No. What I am saying, though, is that this story shows us just how personal a decision for a life of faith in Christ is. Many of us hide behind stories of how ‘bad’ and ‘hypocritical’ church folk are and, while this may be true in many cases, it’s not the real message or the real story. The story of Christ’s love is one of a loving Saviour who invites all of us – regardless of who we are in life, famous or not – to an adventure, a relationship and a journey. Our invitation is for you to make this decision for Christ. It’s a thing of sheer beauty.