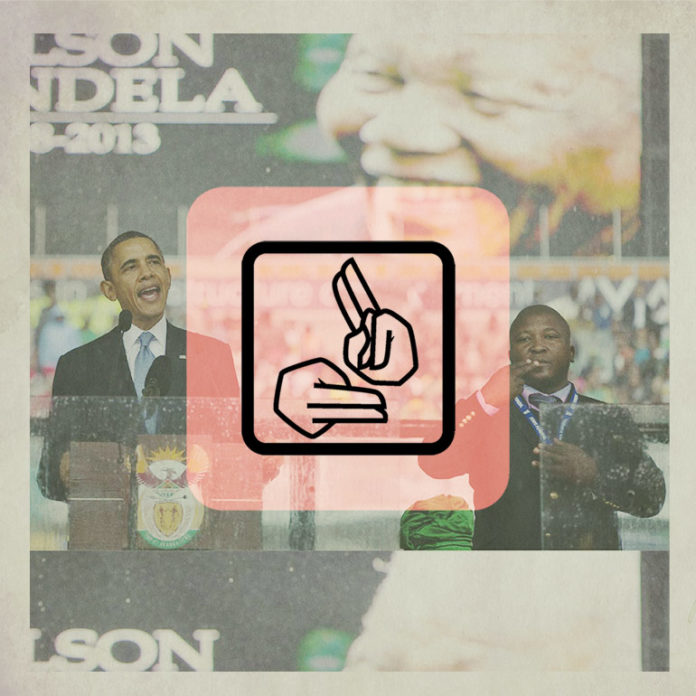 I guess most of you have heard something about what is probably the biggest ‘sideline’ story to the Memorial Service for Nelson Mandela in Johannesburg.  Thami Jantjie, the official interpreter on the big day, has become infamous overnight.   His VIP role? Interpreting some of the biggest speeches and speechmakers into sign at one of the most watched events of the decade. Wow! There he was, ‘speaking’ alongside the likes of Ban Ki-moon, Desmond Tutu and President Obama.  Not to mention Mandela’s nearest and dearest.  But what was he saying?  Nobody really seems to know.

This telling press statement was released by the National Director of Deaf SA, Mr Bruno Druchen,  the day after the memorial:  “The so called “interpreter” who interpreted at the Official memorial service for late former president Nelson Mandela at FNB stadium has been dubbed the “fake interpreter” and the Deaf community is in outrage.  This man is not in fact a recognised, professional South Sign Language Interpreter. He is not known by the Deaf Community in South Africa nor by the South African Sign Language interpreters working in the field.   To the best of our knowledge he has not undergone any formal training in South African Sign Language or Interpreting offered by any recognised institution which offers these training courses.”   (Source:  Deaf SA Facebook page)

Eish. Despite the fact that this is an insult and a shame for the Deaf around the world, as well as an embarrassment to most Africans who wanted everything about this event to be honouring of our Tata Madiba…perhaps the best response is to focus on the lighter side of the situation. 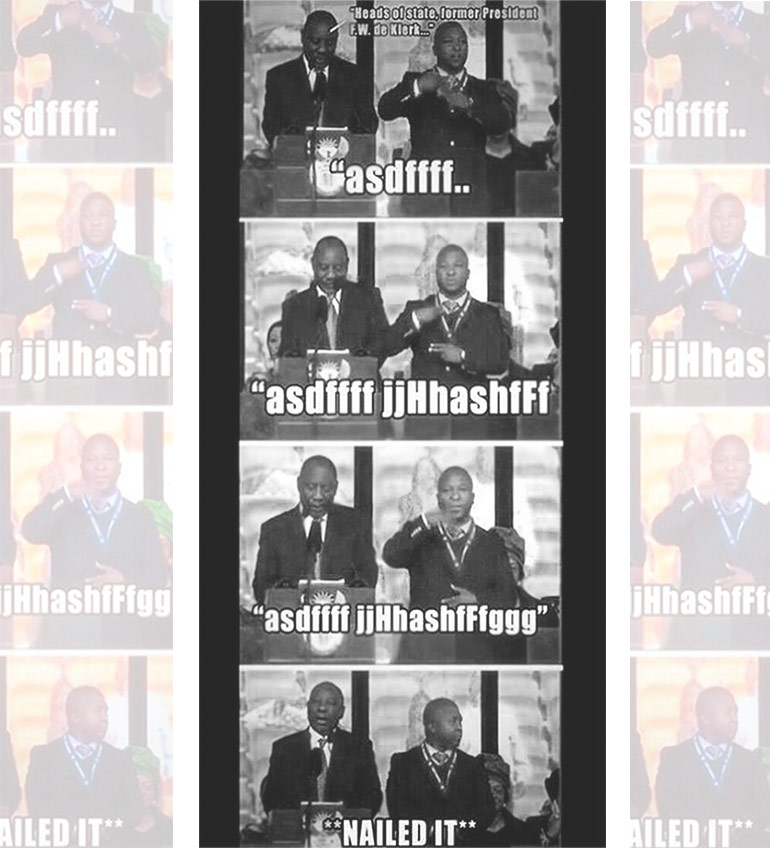 I also had to laugh at this (slightly censored!) tweet posted by a South African who clearly also saw the funny side of the situation.

A local radio station decided to give Mr Jantjie the chance to defend himself live on radio.  And rightly so.  Listening to this, I can’t help think that he would have been better off politely declining the offer.   And maybe he should have done the same when the powers that be invited him to be the official interpreter for the historic Madiba Memorial service!  Listen from about 11:20 to the end…

Oh dear.   Maybe we shouldn’t be too harsh on the guy, though.  It must have been a hugely pressurised situation (no kidding), and I don’t pretend to know all the facts involved here.

Nevertheless, there is something deeply disturbing about the fact that without the Deaf community blowing the whistle on this guy, none of us would have been any the wiser.  What else are we being deceived about when it comes to ‘interpretation’ by the media, and government, of the stuff in our world?  Especially when it comes to those who have been given (temporary) authority and power over us.  Jesus challenged Pilate about this very thing just before he was executed:

In a world of fakes and deceptions, Jesus stands as the Truth.  I choose to let Him and His Word be the Interpreters for what this world and its powers throw at me – whether funny or frightening.