Will you be there

Will You Be There

Growing up, I was never very well versed with what occurred in the music circles, not that I was clued up about much else, save for the different kinds of wild berries, mice and grasshopper species. Did I mention the anthem of Maramba, “Will you be there”? In case you’re wondering where Maramba is, it’s in the lands yonder where hope resides and the streets are paved with hope.

At present I could book a spot next to the dinosaurs for my lacking in understanding of the difference between hip-hop, pop, R n’ B and other such genres. Despite being musically challenged in many ways, I can proudly say, I am able to identify Michael Jackson without a shadow of a doubt! Trust me, in my book that goes down as a blue-ribbon-worthy-award -winning achievement!

Despise or love Michael, anyone with a grain of appreciation for art would take their hat off to the Wacko Jacko for his ability to captivate all with his artistry. While listening to the hit, “Will you be there…” I got to asking myself a few questions. Would I be there entirely, selflessly and with all abandon for the one I truly loved above all else? Would I be willing to endure persecution for their sake? Would I be willing to take their word when all signs seem to suggest their promises don’t hold any water? Would I keep talking in moments when walls seem to be the better option for an audience? Would I be there if I had to give up all that is familiar and wander into alien territory where milk and honey supposedly flow?

Michael Jackson – Will you be there

We often hope  friends, family and loved ones will be on stand-by when the going gets tough but forget that relationship is a two way street. The question so easily slips out whether voiced or simply thought but if tables were turned, will I be there? Will you be there? 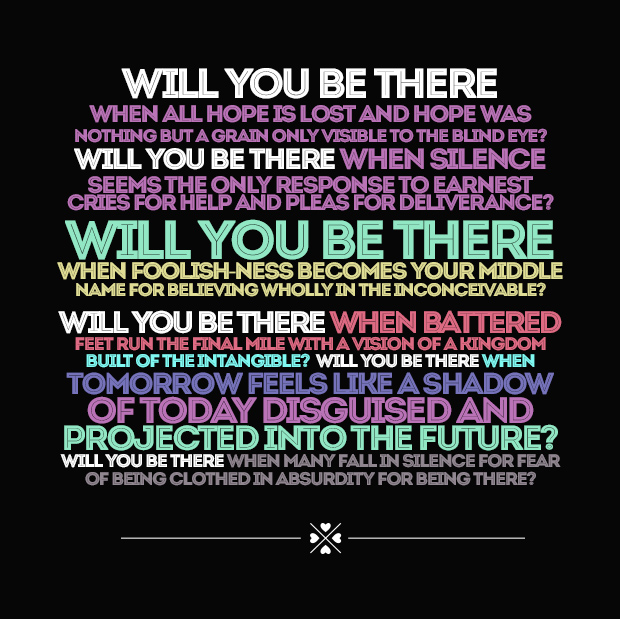