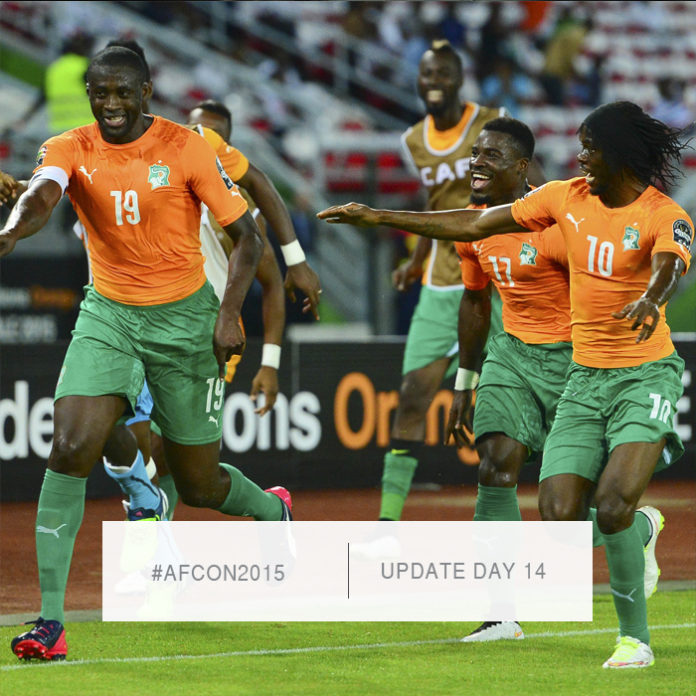 It’s goals galore, riveting football, and of course the pressure of the knockout situation that is making these final games of AFCON 2015 something quite special.  We had our first semi final last night and it’s again going according to the script, even if there was a glimmer of a possibility of an upset.  The DRC showed us last weekend that we should not write them off, even if most of us knew that Cote d’Ivoire had started to turn on the magic and would be near unstoppable to beat, as they proved to be last night in Bata Stadium.  Let’s get into the details.

The 3-1 win over the DRC and the way the Mighty Elephants played, is like chalk and cheese compared to the group stages and that has many excited about what happened last night, about what is coming tonight and what we’ll get to see on Sunday evening.  It was the Big Names Night Out as Serge Wilfried Kanon, Gervinho and Yaya Toure added their names to the score sheet. So now it’s 3 finals in nine years for the men from West Africa.  It would be fair to say that both teams didn’t exactly set AFCON 2015 on fire at the start of the tournament and even this games took a while to get going.  Well, 20 minutes to be exact cause that’s when Africa footballer of the year, Yaya Toure got things going by netting a blocked effort from the edge of the area.  4 Minutes later the DRC set matters level with a Dieumerci Mbokani penalty after Eric Bailly handled the ball inside the area.  Both teams seemed like they could keep scoring throughout, but the exchange stayed at 3 goals to 1, despite some phenomenal efforts on goal from the DRC’s front men.  Thanks to Supersport.com, you can watch the highlights of last night’s game, here.

The Ivory Coast are through to Sunday night’s final, and they will face either Ghana or the hosts, Equatorial Guinea, who are facing off tonight.

We look forward to bringing you news on what goes down in Malabo tonight, in tomorrow’s update.  Until then, let us know who you think will raise the cup on Sunday night.